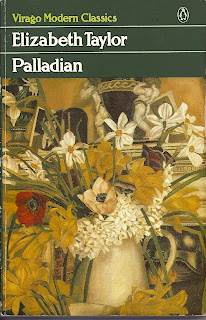 '"Why does Sophy tell untruths about her mother?"  Cassandra asked, with the sharp edge to her voice of sudden and undisciplined courage.
"We all tell lies about her," he said calmly.'

Palladian is a bit of a compilation album if you will, with nods to several iconic novels.  Part of the enjoyment in reading this book is acknowledging the references and marvelling at how Taylor pulls them all together.  It's a bit like one of those games where you pick a vegetable, a movie, a colour and a country, plot them into an abstract sentence and you end up with a humourous tale.  Only Elizabeth Taylor does it much more artfully and there is nothing funny about this story.  In fact, it's rather dark.

Cassandra Dashwood, barely out of her teens, boards a train which will take her to the crumbling pile that is Cropthorne Manor.  A copy of The Woman in White is tucked into her bag.  She is to become a governess at a time when that term is rapidly sliding out of fashion but fits in rather nicely with the Jane Eyre-esque atmosphere.  Sitting across from her on the train is the deliciously named Mrs Veal, a publican's wife, who smoothes her gloves and pats her blue fox stole.  Both are bound for the same village.

"If you discover anything muttering in dark corners, it is Nanny and you must not mind her," said Margaret.

Nanny is a reincarnated Mrs Danvers, sharp-eyed and with enough seniority to comment on all she sees fit.  Her folk remedies sharply contrasting with Margaret's training as a doctor but lately Margaret is too busy occupying the kitchen's larder and hacking up freshly baked bread to practice medicine.  This raging appetite is driven by a never-ending pregnancy but one also has the impression that she is filling another void.

Marion is the lord of the manor and the embodiment of an effeminate.  Hardly a Mr Rochester but Cassandra is determined to fall in love with him.  Who could blame Marion for being suspicious of her affections when the other women around him, past and present, find it hard to resist his cousin, Tom.  This smoldering drunk who steals money, uses Mrs Veal (not that she minds), is work-shy and hangs around the village cemetery a la Heathcliff, is constantly enabled by those around him.  I didn't have any pity to spare for this fellow but his demons do weigh heavily.

The most tragic figure in this story is Cassandra's charge, Sophy.  Barely past their initial introduction, Cassandra discovers a Siamese cat in a basket on the window-seat.  It is near death and Sophy is desperate for the poor thing to survive, yet it seems as though there has not been anyone in the house she could go to for help before Cassandra's arrival.  She isn't worth the time of day to anyone.  She is as much a ghost in the house as her long-dead mother, all too aware of adult issues and problems without any of their concern for her needs.  No wonder she tells 'untruths'.

On the surface of this book I enjoyed a fascinating pastiche but once laid aside the aftertaste is somewhat disturbing.  The tragic life of a child and the Marion/Cassandra storyline with its slight pedophile tone was quite icky for lack of a better word.  While this wasn't my favourite Elizabeth Taylor novel so far, the skill of the author is definitely something to be admired and I will read it again one day, no doubt.


Special thanks to Book Snob for hosting this month's title in a celebration of Elizabeth Taylor's centenary!﻿
Posted by Darlene at 9:52 AM
Labels: Elizabeth Taylor, Palladian, pastiche