A View of the Harbour by Elizabeth Taylor 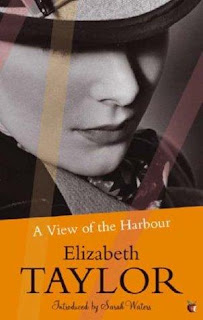 'I am a bad mother', she once more told herself and fought back the feelings of shame and oppression which assailed her at this admission.  'When I have finished this book I will never write another word.  I'll devote myself to Stevie, get Prue married somehow, turn Robert's shirt-cuffs, have the hall re-papered.'

Beth Cazabon shouldn't feel so guilty.  If she stopped daydreaming about scenes for her latest book she would twig that her husband is having an affair with her best friend and neighbour.  She spends almost as much time peeking from behind the curtains as the other villagers but she is blind to this particular deceit.  Even the sweeping lamp atop the lighthouse acts as an eye, surveying all that goes on amidst the damp streets and neat houses in Newby.

Having a keen eye for observation herself, Elizabeth Taylor brilliantly evokes the mood of a claustrophobic community.  Even Bertram Hemingway, a retired naval officer and recent resident, notices how often Tory, elegant and divourced, quick steps back and forth between the Cazabons' and her own front door.  With his gallant offers to buy various women drinks at the pub or escort them home safely he soon becomes a favourite with Lily Wilson who has the creepy occupation of running the Waxworks Exhibition.  The latest attraction being the Duke and Duchess of Windsor, who would be aghast to know that cast-off clothing and paraphernalia will constitute part of the wardrobe on their waxy frames.

While Beth may be oblivious to her husband's affair their twenty year-old daughter, Prudence is not.  Her inability to broach the subject with her mother means showing up red-faced with shame at Tory's front door when, as the village doctor, her father's services are required.  Struggling herself with the idea of being on the cusp of womanhood Prudence spends a considerable amount of each day boiling offal for the cats' dinner and enjoying the sensation of their fur against her bare skin at night.  Barely able to express herself, even the howling winds that blow in from the sea steal the words from her mouth at times.  There is also a younger daughter, Stevie, 'the fifteen years between Prudence and Stevie, suggested that they were haphazardly conceived' who screams when she doesn't get her own way and acts quite silly causing no end of  frustration for her impatient father.  I love it!

Elizabeth Taylor's also drops in some fabulously comic moments when you least expect them.  Towards the end of the book I found a scene reminiscent of something from Catherine Tate's collection of characters and it made me laugh out loud.  After hours and hours of concocting death scenes and funeral services for a character in her book, Beth is frozen with fear at the thought of having to attend a service for one of the villagers.  'But, Robert, I couldn't!  I have never been to a funeral in my life.  I shouldn't know what to do.  I should hate it.  Oh, hate it!'

Most of the time A View of the Harbour is quite subtle, its characters go about their business and the reader bears witness.  But Elizabeth Taylor brilliantly illustrates that regardless of how banal or tedious our day-to-day lives may seem, a profusion of thoughts and emotions keeps us constantly engaged even when we are silent or solitary.  A zinger of a last paragraph left me wishing there was a sequel.  My highest praise is reserved for Taylor's later novels but I quite enjoyed the time I spent reading this book and most definitely recommend it.
Posted by Darlene at 10:03 PM
Labels: 1940s, A View of the Harbour, Elizabeth Taylor, village life