The Shooting Party by Isabel Colegate 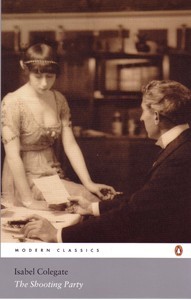 My edition of this book comes with a keenly-observed introduction by Julian Fellowes.  The copyright is from 2007, and while he mentions Gosford Park, I wonder if he had any idea that a future project would eclipse its fame.  The 'upstairs/downstairs' storyline has always held massive appeal so for anyone who hasn't had their fill over the past couple of years of Downton Abbey get yourself a copy of The Shooting Party.

Set in Oxfordshire on the estate of Sir Randolph Nettleby, Baronet, the annual shooting party is about to take place during the autumn of 1913.  Gaslight fills the spacious rooms and the aromas of tobacco and perfume meld as the country house fills with guests from across the country and Europe.  Meanwhile in the outbuildings, stables, gamekeeper's cottage, gun room and kitchen, there is a flurry of activity as the staff work rigourously to ensure that everything runs smoothly.  The claret is ready to be poured when needed, there is cake ready to be sliced at a whim and while out on a shoot a gentleman need not take his eyes off of the fleeing birds as a freshly-loaded rifle is placed into his outstretched hand by his loader.

While this isn't Downton Abbey who could blame me for making comparisons?  At a dinner party where the guests are feasting on lobster vol-au-vents and drinking champagne, I laughed when young Cicely displays a playful wit.

"'Oh, but the Walker Kerrs are perfectly well connected too.  Mr Walker Kerr was a son of Lord Craven.  He was killed in the most ghastly circumstances in Africa.'
'How terrible.  What sort of circumstances?'
'He was eaten.  By a huge black Zulu.'
'Oh really, Cicely,' Ida who was on the other side of the table had caught her daughter's last remark.  'You are naughty.  It was nothing of the kind.  He was killed in a perfectly straightforward manner in the Zulu wars.'
'Exactly,' said Cicely, undaunted.  'In a perfectly straightforward manner.  For a Zulu.'"

A conversation which could easily have taken place amongst the Granthams at table.  Although, I'm still trying to decide whether the Dowager Countess would favour the lines of Ida or Cicely.  I digress.

Isabel Colegate examines the etiquette of the aristocracy in every single gesture from the studs worn in a man's shirt to the decision to begin an affair.  And the realization to some that none of it really matters.  The Great War is looming and among the staff downstairs there is the hope that it will be an equalizer, a chance to break free from their legacy of servitude.  A tragedy during the shoot brings into focus the concept of gentlemanly behaviour for Sir Randolph and some of his guests.  For one guest in particular though the incident is barely worth noting, an act that firmly places Cicely on the side of those less fortunate than herself.

The only thing that deflected some joy for me in the reading of this book is that there are so many characters introduced in the early stages of the story.  I resorted to making a quasi-family tree/guest list on a sheet of paper to keep everyone straight.  Other than that tiny distraction this is a brilliant novella and one I will be returning to time and again when I need a fix of the quintessential 'upstairs/downstairs' story set during the Edwardian era.  Thanks once again to Book Snob for recommending it to anyone who would listen.  She was right!
Posted by Darlene at 9:26 AM
Labels: Country houses, Downton Abbey, Edwardian, Julian Fellowes, the shooting party