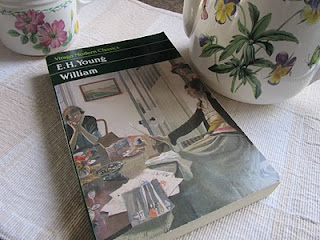 This post will appear sooner than I had planned but out of consideration for those of you joining me and Simon from Australia and many time zones ahead...here we go!

When I first pulled a copy of this book from behind a stack of used books in a shop my first thought was 'It's about a man'.  And to be honest I wasn't that happy about it.  But flipping the book over I read the sentence that convinced me EH Young was an author I needed to discover.  It was 'She published eleven novels of provincial life in which her precise and truthful portrayals of relationships and social conventions are enhanced by a subtle humour.'

Simon has written a beautiful review of this book and posted links to other fabulous reviews of William so please have a look.  And what did I think?  My overwhelming thought throughout the book was how did, E.H. Young, who never had children understand so well what it is to be a parent?  Before becoming a parent myself I had no idea that when your child is sad, you are sad.  When they are happy, so are you and if you think they are headed for disaster and ruin you will try your best to head them off.  Young understood this and expresses it so well.

Kate Nesbitt well and truly plays the role of matriarch.  It is a command performance every year for her birthday and a great to-do is made.  Her fan-waving, arm flapping, over-bearing style of mothering is positively Mrs Bennet-esque.  I laughed  and rolled my eyes when Mrs Nesbitt places lozenges on Lydia's bedside table 'in anticipation of a cold'.  Her persistance in a matter is admirable and irritating at the same time.

There are differing opinions as to whether or not William Nesbitt is a good father.  He certainly shared more dialogue with his children than I would have stereotypically expected from a father during the 1920s.  And yes, he could be a bit manipulative at times but when you're a parent you call it 'guidance'.  He was a kind and generous man, sharing flowers from his buttonhole with children on the street.  For a man who was financially well off it was his time that he gave most to his children and I admired that.  The way he admired Lydia was more than a tad icky at times, I'll give you that.

There are five adult children and it took a chart in the beginning to keep everyone straight.  Add in spouses and grandchildren and it was a very busy book until I knew who belonged with whom.  Each is an interesting character but we really don't get to know their only son, Walter, all that well.

There were some rather funny lines in the beginning and the feeling was charming and cosy.  Family dynamics and conflict created a poignancy that I wasn't quite expecting which gave the story depth and I could have happily read a version twice as long.  In the introduction, John Bayley, wrote 'Every true addict of the novel will want to make, or remake, her acquaintance; and for those meeting her books for the first time William is certainly the one to start with.'  It worked for me.

Thanks to everyone who found a way to get their hands on a copy of this book and joined in.  And to anyone feeling as though they've missed out, Simon will be offering up a copy so watch his blog!  Now it's your turn to comment and feel free to engage others...how did you get on with the Nesbitt family and this book?
Posted by Darlene at 10:13 PM
Labels: E H Young, Virago, William