More from The Closed Door and Other Stories... 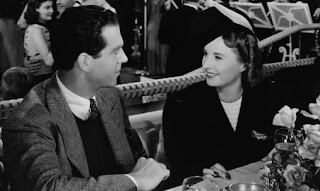 Try as I might, there is absolutely no choosing a clear favourite amongst this collection of short stories.  The Closed Door and Other Stories by the sublime Dorothy Whipple exceeded all my expectations and I highly recommend it!

Picking up where I left off...

Family Crisis - Mr Parker prides himself on being respected and over the course of time becomes an unbearable snob.  No expense is spared in elevating his son, Alec, to a position in a law firm.  His daughter, Margaret, is frustratingly kept at home to hone her domestic skills and cater to her lazy mother.  When an event shocks this family to their very core, Mr Parker comes to realize that those he has held in the highest esteem were not perhaps the ones who deserved his attention most.

After Tea - This story had me cheering at the end!  In an all too familiar scene, Christine, shares the bulk of the domestic duties with the maid.  In fact, the maid is better off as she is paid and allowed time off.  Christine is desperate to attend free lectures at the university but her parents put her off.  When some information comes to light, Christine finds the strength to make a stand and it is sheer triumph!

Wednesday - This was the most heartbreaking story in the collection.  Mrs Bulford, caught in a messy divorce, is now reduced to waiting at the gate to see her children.  Her former husband has a new wife and in anguish but understanding she hears her younger children refer to this woman as 'Mumsie'.  Catherine, at thirteen, quietly turns away from her mother's attempts at affection, old enough to know what has gone on.  I just may need a tissue if I go on any longer!

Summer Holiday - Rose was the nicest nurse-maid the family had ever had.  In fact, she was treated almost as one of the family.  There are twins, Roger and Charles, but it is Ellie and her big sister who never seem to leave Rose alone for a moment.  They adore her beau, Frank, and love to sit near him when he comes for visits.  The family takes a vacation at the seaside where they stay at Mrs Simpson's rooming house.  Another resident, a flashy Mr Salter, quickly takes a shine to Rose but the young sisters are ill at ease around him.  This holiday won't soon be forgotten but not because of the sun, surf and ice cream!

Saturday Afternoon - Mrs Thorpe and daughter, Muriel, love Saturday afternoons when Mr Thorpe leaves the house to attend his club or do goodness knows what else.  They settle in the garden, eat chocolates and knit or read.  But one afternoon there is a knock on the door and it is a policeman asking for Mr Thorpe.  Saturday afternoons may never be the same again!

Cover - Harry Smith married his sweetheart, Meg Saunders.  Nothing unusual in that but considering what Meg got up to while Harry was away fighting in the war...well, that takes a certain fellow.  A chance to leave the village and escape gossip is a most welcome opportunity but despite new beginnings and a new friendship the ending is a poignant one.

This collection was the perfect companion for Persephone Reading Weekend.  Each story was fascinating and will no doubt be pulled off of my shelf again and again.  I was swept back to another era and marvelled at how I could so enjoy stories where young women are kept at home to cook and clean while their spirits long to soar.  Such is the skill with which Dorothy Whipple tells a story I suppose.

I had to work on Saturday and today I am losing the fight against a head cold but Persephone Reading Weekend has definitely made this weekend sparkle for me.  Thanks to everyone who participated for your entertaining and thought-provoking posts and most of all to Verity and Claire for their efforts in hosting this event yet again!