At Mrs Lippincote's by Elizabeth Taylor 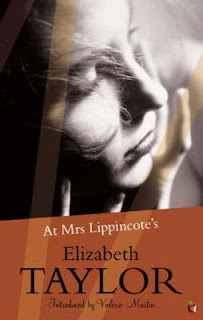 'How happy we are' thought Julia.  The sunlight reflected in her teacup danced on the ceiling.  Oliver looked up and smiled.  "Vanish, angel!" he said, as he had done as a baby, and from habit she placed her hand over the top of her cup.'

I will no longer entertain the idea of feeling completely bereft upon completion of Taylor's oeuvre.  It will be my absolute pleasure to revisit each and every one of her books, gleaning ever more, time and time again.

The Davenants have arrived in a new town due to Roddy's most recent order from the RAF.  The furnished house they rent belongs to Mrs Lippincote who has made plans to stay elsewhere for the duration.  In a few eerily funny scenes her daughter, Phyllis, doesn't seem to understand that she can no longer appear unannounced and dig through her mother's belongings in the attic or closets.

While Roddy is busy being an officer, Julia Davenant fills her day running the house, looking after their son and spending a fair bit of time with the darning basket.  My image is one of Julia wearing a string of pearls and high heels while she does so.  When Roddy's spinster cousin, Eleanor, isn't busy with her fellow communists she dreams of just the sort of life Julia has.  Oh yes, she'd very much like Roddy all to herself.  Just to build in some tension, Eleanor has lived with the Davenants since her nervous breakdown.

Usually a tedious household can be buffered somewhat by the presence of a child but a pale and sickly Oliver only adds to the strain.  His lack of robustness hardly impresses the alpha-male in Roddy and his weak frame worries Julia.  Delightfully for the reader though he loves books and there are all sorts of references to various authors and their works.

'In London, he would go every Saturday morning to the Public Library to look at a picture of Lorna Doone.  Some Saturdays it was not there, and he would go home again, wondering who had borrowed her, in what kind of house she found herself that weekend.'

While Julia may appear to be the dutiful wife she holds a bit of herself back for her own sake and I really enjoyed her character.  She ventures out the odd night rather than keep her husband company and is quite friendly with a couple of men.  One being the Wing Commander, who much to my pleasure knows his way with a ball of yarn and some knitting needles.  Julia might be guilty of the odd bout of hand-wringing but she holds her own when push comes to shove as it does during a twist towards the ending.

I've reached the midway point, this being my sixth Taylor novel from her list of twelve and she has yet to disappoint.  To celebrate the centenary of Taylor's birth there is a group of readers over at LibraryThing on the Virago Modern Classics forum reading one title per month if anyone is interested.  Up next for February, I believe, is Palladian.  Laura, from Musings is also an enthusiastic supporter of this event so keep an eye out for her posts!
Posted by Darlene at 8:20 PM
Labels: Elizabeth Taylor, Virago